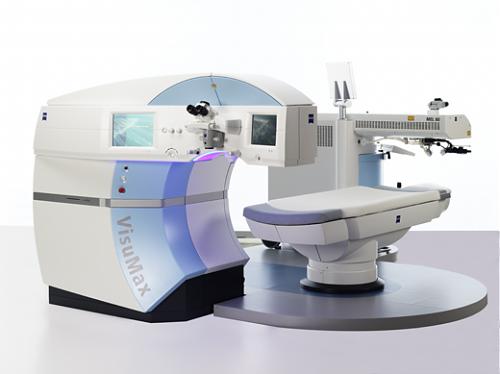 In general, patients who qualify for LASIK are also candidates for the VisuMax laser corneal flap treatment, and thus will benefit from its accuracy and gentleness.
Benefits of Blade-Free

LASIK’s greatest complication is flap problems after surgery. Because blade free is so precise, this risk is significantly reduced.

The real benefits for some patients include:

A very accurately focused laser beam is guided through to the cornea in a computerized treatment that is unique to each patient. The laser beam moves through the cornea allowing the corneal flap to be easily lifted by our surgeon.

Importantly, the VisuMax® is the only femtosecond laser to incorporate a curved interface that makes contact with the cornea during flap creation. This technology allows for the patient to maintain visual sight during the entire procedure. This provides maximum comfort and it allows you to see throughout the entire procedure, unlike with microkeratomes or other femtosecond lasers, where your vision is “blacked out” for awhile and patients have reported feeling uncomfortable pressure.

When the patient is able to see throughout the procedure, it in turn serves to maximize the precision of the bladeless LASIK flap creation process by helping him or her to maintain constant focus during treatment.

Patients often describe the VisuMax procedure like the putting of a soft contact lens. Each treatment is planned precisely to fit their unique eye contour and fit seamlessly back into place, making the procedure reliably effective with an extremely low rate of LASIK complications.

Carl Zeiss has over 160 years of experience in the development of optics and Zeiss high performance optics are key to providing an optimum corneal flap.

Due to the Zeiss high performance optics, the laser beam is guided very precisely to the desired depth, resulting in most accurate flap thickness. In addition, the laser beam is directed in a very focused manner, which allows the doctor to apply only minimum laser energy to the eye during the treatment. As a result, the tissue outside the defined area of the cut remains untouched.

Since the VisuMax Femtosecond laser is able to create very thin corneal flaps, some patients who were previously not a candidate for LASIK due to thin corneas, are now benefiting from the procedure.

Our doctor will make the final determination.

Make Your Bladeless LASIK Appointment with us Today…