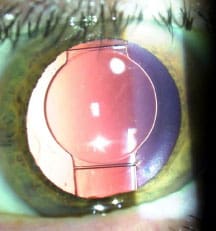 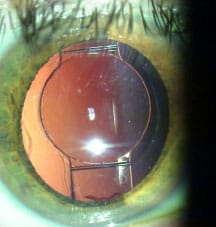 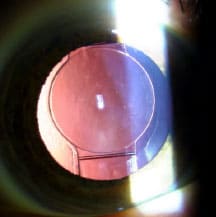 With meticulous lens epithelial cell cleanup, the capsular bag changes little over time, and whether the rhexis was perfectly round and centered initially becomes irrelevant, according to Dr. Safran. Source (all): Steven G. Safran, MD

Why some are rebuking femtosecond laser cataract surgery

If you had a cataract, would you prefer to undergo traditional or femtosecond cataract surgery? When members of the ASCRS cataract listserv were asked this in a survey conducted by Gary Wortz, MD, Lexington, Ky., 91.9% of non-user surgeons responded that they would prefer manual to femtosecond cataract surgery for their own eyes, according to Steven G. Safran, MD, Lawrenceville, N.J. What’s more, 98% of these surgeons said they believe the femtosecond laser is being used as “a marketing tool to attract new patients.” Dr. Safran views such responses as a powerful statement of the silent majority who, he believes, is turning away from femto cataract surgery.
The claim that a perfectly round, centered capsulorhexis created by a laser will lead to significantly improved refractive outcomes was dismissed by the majority here, Dr. Safran said. Only 4% believe this plays a significant role in improving refractive outcomes, in contrast with 79% who feel it is not a significant factor, he reported. The idea that the rhexis plays an important role in effective lens positioning was disproved in a study by Oliver Findl, MD, Dr. Safran said. This prospective study’s results were reported at the 2013 European Society of Cataract & Refractive Surgeons Congress and showed that the rhexis size and shape had no significant effect on effective lens position, tilt, or decentration, and thus were irrelevant to refractive outcomes with modern IOLs.
“The rhexis can only influence the position of the optic to the extent that it can distort the structural relationship between the optic and the haptic as set by the IOL manufacturer,” he said. “That isn’t very much with modern one-piece IOLs.”

Even when the cost of femtosecond laser was factored out of the equation, it had little bearing on what surveyed surgeons would choose for their own eyes. Specifically, when asked what they would choose for their own eyes if they had 1.25 D of corneal astigmatism and wished to address this at the time of cataract surgery, the vast majority (85%) selected manual phacoemulsification with a toric IOL. Further, the slightly higher price tag of $1,250 opposed to $1,000 for femtosecond phaco didn’t dissuade them, Dr. Safran observed. Just 2% of practitioners said they would opt for the femtosecond-assisted phaco and laser LRI approach versus 85% who would choose the manual procedure with a toric IOL despite the higher cost for the latter. Dr. Safran views this as indicating that many ophthalmologists see the use of the femtosecond laser for cataract surgery as “less effective than the hype surrounding it.” “Who wants to buy a $500,000 device unless it provides real benefit? You have to pay for this. You have to recruit people and try and convert them,” Dr. Safran said. “What are you telling patients about why they should have this done? We’ve heard people say, ‘I think it’s better, more accurate, and more precise.’ The ophthalmologists in this survey didn’t think so.”
Studying safety

New study results have called into question whether making the rhexis with the femtosecond laser is indeed safer. Dr. Safran pointed to a study published in the January issue of Ophthalmology on anterior capsulotomy integrity after femtosecond- assisted cataract surgery. “In this study, the tear-out rate was 15 times higher with the femtosecond laser than with a manually created rhexis. In every case, the rhexis tore out later during subsequent steps in the procedure even though it was made perfectly with the laser. This suggests a possible problem related to structural integrity of the femto-created rhexis,” Dr. Safran said. He said that at two separate centers investigators had about a 2% tear-out rate with the Catalys laser (Abbott Medical Optics, Santa Ana, Calif.), and at a third they had a 2.9% tear-out rate with the LenSx laser (Alcon, Fort Worth, Texas). This was in contrast to a 0.12% tear-out rate with the manual technique. “If you’re a very good surgeon you might have a tear-out rate of 1 in 1,000 or 1 in 2,000,” Dr. Safran said, adding that in this study the rate of manual tear-out was 1 in 822. “For me, about every 5 years I might see a radial tear. They’re exceedingly rare. It appears that the use of the laser may significantly increase the possibility of this occurrence.”
Peter E.J. Davies, MD, Newcastle, Australia, who was an investigator for this study, recalled that in his first 50 cases using the femtosecond laser, everything went well. “But then I had a list where I had two posterior capsule ruptures in a row,” Dr. Davies said. “In my entire surgical career I have never ruptured two capsules on a list.” Dr. Davies teamed with Brendan Vote, MD, University of Tasmania, to take a look at how the incidence of anterior capsular tears compared with the manual and femtosecond approaches in approximately 1,600 patients. It was the first large comparison study of the two techniques.
The surgeons were treating real-world cataracts, he said, and not performing best-case clear lens extractions. “Our anterior capsule tear rate was 15 times higher with the femtosecond laser,” Dr. Davies reported. “We had far more tears when we used the laser than when we tore the capsule by forceps.”
Investigators examined what was going on with the capsules. “We published the world’s first electron microscopy images of a human capsule cut by the femtosecond laser using three laser brands,” Dr. Davies said. “With each brand of the laser, there is a very irregular margin, aberrant misfiring, and rows of laser shots that are fired in the wrong place, and there are divots in the capsule that aren’t there when the capsule is torn with forceps.”
The images are very different from the low magnification images of pig eyes that had originally helped to reassure him on the femtosecond’s safety. “I feel I was misled by the porcine images I saw initially,” Dr. Davies said. “I would not have purchased the technology if I had seen images like the ones we published. How can such irregular capsulotomies be as strong?” Both the manual and femtosecond images in these pig eyes looked the same, he recalled. However, there is a big difference between human and pig eyes. “A dead pig capsule is thick and hard, so it’s different from a human capsule, and these eyes do not move,” he explained. When the femtosecond laser docks onto a human eye, he said, it does not hold the eye completely. Some misfiring due to movement is unavoidable, with packets of laser light 200 micrometers long being fired, he said. “If the eye moves, there is no way a computer is going to detect the movement and signal the laser to change its firing or stop it because the light has already released,” he noted. “I believe that intuitively, the capsule is not going to be as strong if it’s cut by a micro-postage stamp mechanism of mini explosions,” he said. “I think our clinical data supports that.”
“Most importantly, in our data, there is no difference in visual results or refractive outcomes between the laser and manual groups,” Dr. Davies said. “We have more than 1,000 patients in each group now.”
“A common argument for the laser is that the results improve beyond the learning curve. We did not observe a learning curve. The complications kept occurring. We feel there is a fundamental issue of capsule strength that has not been addressed with good quality studies.”
“For now, our paper abolishes the concept of universality of benefit for all surgeons. The laser did not benefit our patients, and cannot be considered the gold standard until large, good quality studies are done,” Dr. Davies said. “We have 6-month data that does not show significant corneal benefit either.” The 6-month data is being prepared for publication.
Dr. Safran pointed out that even if you assume the laser is more efficient, it’s only cost effective for the doctor if the patient pays for it. “No doctor is going to want to take $500 out of his fee,” he said. In addition, there are click fees and maintenance costs. “The problem is you cannot charge a patient for a ‘golden scalpel.’ As a result, it comes down to charging patients for limbal relaxing incisions, which many patients don’t need, and others are better served with a toric IOL,” he said. Overall, Dr. Safran views the push for the femtosecond laser for cataract surgery as marketing driven. “I don’t see the technology as a springboard—I see it as a crutch,” he said. “What I’m looking for is a trampoline, something that’s going to help me jump higher, go further, do better—not something that’s going to automate and reproduce what I can already do.”