When LASIK is not enough for myopia

Surgical options are increasing for higher levels of nearsightedness.

Myopia is the most common refractive error — in the United States alone, it affects between 25% to 41% of the population. While myopia vastly differs amongst various ethnicities, it appears there may be truth to our parents’ incessant nagging during childhood to not sit too close to the television, as excessive near-point work appears to be strongly correlated with myopia progression. Other contributing factors include genetic predilection, prolonged dark exposure, education level and an inverse relationship to the amount of time spent outdoors.

EXCIMER ABLATION AND ITS VARIANTS

Popular, but not without risks

Corneal excimer laser surgery — LASIK and advanced surface ablation techniques including PRK, LASEK and Epi-LASIK — is undoubtedly the most popular refractive surgical procedure performed in the pre-cataract population. It can accurately treat myopic refractive errors up to 12.00 D. 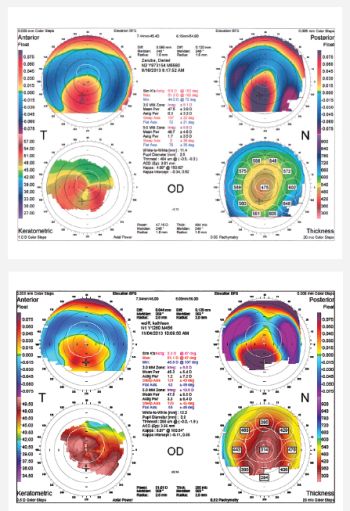 Surgeons have various methods to help them better assess a patient’s risk for developing ectasia, including advanced imaging technology and device software to review posterior corneal curvature and other global screening modalities, such as the Randleman Ectasia Risk Scoring System.

While no single modality is foolproof in identifying potentially ectasic patients, the Randleman Risk Scoring System draws attention to the most disconcerting features in those at highest risk. Ultimately, corneas that develop postsurgical ectasias likely have an abnormal hysteresis as an underlying etiology, so a way to accurately measure this will be instrumental.

LASIK for high-risk corneas will likely gain more traction as we become more familiar with collagen cross linking (CXL). In the setting of post-LASIK or PRK ectasia, CXL is extremely effective at stabilizing the cornea, as well as bringing about a progressive flattening effect over time. It will be interesting to see how clinicians use CXL in conjunction with LASIK in naïve corneas, as this will require adjustments to surgical treatment plans and require nomograms to account for the flattening effect that CXL itself induces.

LASIK is not always a viable option for high myopes, of course, because they may have inadequate residual stromal bed or dry eye disease. In these cases, advanced surface ablation (PRK, LASEK or Epi-LASIK) may be a good alternative.

Unfortunately, stromal haze is more commonly associated with higher ablation depths. The surgeon applies mitomycin C 0.02% for 12 seconds after the laser ablation to effectively mitigate corneal haze for eyes at greatest risk, including those with ablations greater or equal to 6.00 D or greater than 75 μm.

Other measures to prevent haze are somewhat anecdotal, but an extended course of oral vitamin C, oral steroids and a four-month tapering of steroids postoperatively may also prevent haze formation. More importantly, given the relationship between UV exposure and corneal haze, even one to two years after surgery, ophthalmologists should emphasize protection from and limited exposure to UV radiation. Other important considerations unique to advanced surface ablation can be drawbacks in the immediate postoperative period. In my experience, the recovery of the final visual acuity for higher myopic ablations is more protracted, and can take upwards of two to three months to achieve stability.

Pain is another immediate side effect;, which may or may not differ between the techniques for surface ablation. However, no correlation appears to exist between the degree of discomfort and depth of treatment.

Age as a determining factor

Refractive lens exchange is an effective surgical alternative when corneal laser refractive surgery may not be, such as for myopia greater than 10.00 D, irregular or higher levels of astigmatism, thin corneas or the patient’s desire for presbyopia correction. RLE is often the treatment of choice for hyperopic presbyopes age 40 years and older. However, RLE is less commonly recommended for younger (age 50 years and younger) or highly myopic patients, or both. The key reasons are:

One instance in which RLE is a successful, clinically indicated treatment of choice for a young patient would be for highly myopic children. More specifically, RLE should be considered in children who have amblyopia from their extreme myopia, refuse to conform to spectacle or contact lens wear or both, have neurobehavioral disorders, and their myopia is beyond the range for what we can treat with laser surface ablation or phakic IOL implantation.

Additionally, certain patients with a primary corneal ectasia, such as keratoconus, may be surgically treated with RLE. The treatment of irregular astigmatism is an off-label use of toric IOLs, but it can be an effective option in patients who have excellent spectacle-corrected visual potential.

RLE is not indicated in patients who have poor spectacle-corrected vision. When evaluating these patients, it is imperative to have agreement amongst several devices for the amount and location of the steep meridian.

RLE is my go-to recommendation for hyperopes age 50 years or older and for moderate-to-moderately high myopes with incipient cataracts or closer to age 60 years, especially if they have a posterior vitreous detachment. Some of my happiest RLE patients are the contact lens-intolerant, higher myopes with astigmatism greater than 2.00 D.

Although RLE is an off-label use in these patients, they include those with irregular astigmatism, such as that seen in keratoconus, but only for those who have had very good-to-excellent spectacle-corrected vision and with astigmatism and steep meridian measures consistent amongst various devices.

A fix for presbyopes, too

RLE is also the obvious option for my older patients who desire presbyopia correction but have not been successful with monovision. For concomitant presbyopia correction, I opt for monovision RLE in those patients who were successful monovision contact lens wearers. I use the Tecnis multifocal (MTF) IOL (Abbott Medical Optics, Abbott Park, Ill.) over other presbyopic IOLs, but I’ve also had great success utilizing the Tecnis MTF in the dominant eye and the Crystalens AO IOL (Bausch + Lomb, Rochester, N.Y.) in the non-dominant eye to maximize the benefits of both IOLs while mitigating the scotopic visual aberrations around lights inherent to any multifocal IOL.

In my younger patients who have yet to experience any natural yellowing of their lens, I prefer a chromophore-free IOL. 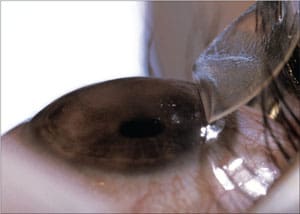 When planning surgery for RLE patients, accurate IOL calculations are imperative. For unclear reasons, certain modern IOL formulas tend to result in postoperative hyperopia, which may result from a more posterior effective lens position or a different index of refraction through a very liquefied vitreous cavity.

Regardless of the cause, using different tools such as an intraoperative aberrometer or an optimized axial length (AL) formula — such as optimized AL >25.0= 0.883(AL) + 2.825 — can help achieve more accurate postoperative results.

PIOLs offer several advantages, including reversibility, lower retinal detachment rate than RLE and preservation of accommodation.17 In comparison to corneal excimer laser surgery for treating high myopia, patient satisfaction may be higher with PIOLs.18 This could be partially attributed to the lower ocular higher-order aberrations and better contrast sensitivity that occurs with PIOL implantation than corneal excimer laser surgery.19

Phakic IOLs are a great option for myopes between -5.00 D to -20.00 D younger than age 40 years without cataract but with mild-to-moderate astigmatism. Additionally, PIOLs give us something for patients for whom LASIK and PRK are not appropriate.

In United States, PIOLs are not suitable for myopia exceeding 20.00 D, nor is a toric option available. Further, depending on the PIOL, they may be contraindicated for patients with Fuchs’ dystrophy or pigment dispersion.

The most concerning long-term safety issues for PIOLs include endothelial cell loss and cataract formation. The incidence of such complications vary between studies and are likely to be higher in a surgeon’s early experience with PIOLs.

Other hurdles with PIOL technology include the accuracy of the lens calculation because the angle width and sulcus diameter correlate poorly with the white-to-white diameter. The result is that more expensive technology is required to measure directly, such as a high-frequency ultrasound or anterior segment OCT. Lastly, long-term data greater than five to six years is lacking for this relatively newer technology.

In the United States, PIOL technology is limited to myopia correction alone. For the time being, other patients can be treated with a combination of options, such as relaxing incisions or corneal excimer laser enhancement to correct residual refractive errors. Similarly, post-RLE patients may also benefit from a corneal refractive procedure as an enhancement.

Better distance vision is in sight

Although high levels of myopia are still difficult to treat, options are on the horizon. Ongoing studies are evaluating everything from collagen cross-linking to angle-supported PIOLs. When these modalities accumulate more long-term data and win FDA approval, we will enjoy greatly enhanced ability to treat certain patient groups, such as the myopic or astigmatic presbyope, more effectively.

With myopia so prevalent in the United States, both surgeons and their very nearsighted patients will welcome these advances warmly.