Research Indicates Multivitamins May Reduce Risk of Cataracts in Men 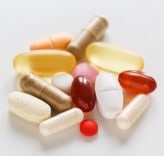 A new study shows that long-term use of daily multivitamin supplements may lower cataract risk in men.

Researchers at Harvard Medical School and Brigham and Women’s Hospital examined data from the Physician’s Healthy Study II (PHS II), which compiled information from nearly 15,000 male doctors age 50 and older. From 1997 to 2011, half of the study’s participants took a common daily multivitamin as well as vitamin C, vitamin E and beta carotene supplements. The other half took a placebo.

The researchers followed the participants to identify how many in each group developed new cases of cataract, which is a clouding of the eye’s lens. They found that 945 cases of cataract developed in the placebo group, compared to 872 cases in the multivitamin group, representing a 9 percent decrease in risk. This risk was even lower (at 13 percent) for nuclear cataract, which occurs at the center of the lens and is the most common variety of cataract associated with the aging process.

The researchers also evaluated the impact of multivitamin supplements on new cases of vision-impairing age-related macular degeneration (AMD), which is the deterioration of the macula – the portion of the eye which is responsible for the ability to see fine details clearly. They found there were 129 cases of new AMD in the placebo group, compared to 152 in the multivitamin group. The researchers said that the slight increase, although statistically non-significant, does raise some concerns and call for further research into the cause.

While this finding may seem to contradict results of other relevant studies, such as Age-Related Eye Disease Study (AREDS) – which showed that taking daily high doses of vitamins C and E, beta-carotene, zinc and copper can slow down the progress of AMD – the researchers note that the studies had different nutrient supplements, dosing and objectives. All the nutrients were provided to the PHS II participants at the U.S. Recommended Dietary Allowance dose levels, which are much lower than the AREDS supplements. Furthermore, the objective in AREDS was to prevent AMD progression among persons who already had the disease, whereas the objective of PHS II was to prevent new cases of AMD, and thus persons who already had a diagnosis of AMD were not included.

For people with intermediate or advanced AMD, the American Academy of Ophthalmology recommends talking to your ophthalmologist about whether taking AREDS supplements are appropriate for them. Some people should not take large doses of antioxidants or zinc for medical reasons. Current smokers and patients with a smoking history should be advised to avoid taking beta-carotene because of the increased risk of lung cancer and consider taking the other components of the AREDS formulation. The subsequent AREDS2 results suggest that other nutrients such as lutein and zeaxanthin may be an appropriate substitution for beta-carotene in the formulation.

The Academy does not at this time have a recommendation for the use of nutritional supplements to prevent cataracts or delay their progression.